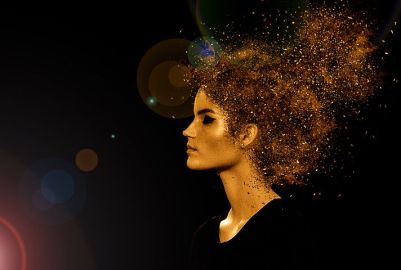 “Your name is Justice.” Omega stroked his chin, his lips twitching in uncertainty. “Hmmm…not quite. Too Pilgrim’s Progress for my taste. Let’s see. Honesty? Truth? Oh, help; I might as well be naming an OldEarth compendium on the virtues of… virtue. How dreary!”

The figure of a young woman with long, black hair, dressed in a form-fitting, dark blue, bodysuit lay on a table, her hands clasped over her chest like the remains of a dearly departed. Omega clapped his hands in frustration. “The joys of creation! Even God Himself left the naming to his creatures.” Omega snapped his fingers, a light in his eyes. “She’ll tell me.”

Running his hand over the woman’s head, he closed his eyes in concentration.

Omega stepped back, one hand over his mouth as if to stifle a laugh—or a scream.

The woman turned her head, her gaze running over the figure before her. A frown formed between her brows. “Who—?”

Omega stepped forward, his hand extended for assistance. “Here, let me help you.” With a gentle touch, he pulled the woman to a sitting position. Bowing in a courtly manner, he smiled. “My name is Omega. At least that’s what my father calls me. But since you are my original creation, I suppose you must call me—creator.”

“Creator?” The woman shifted slightly as her gaze scoured the silent, still laboratory. “Why am I here?”

Omega’s eyes followed hers, and he frowned. “Yes, well, my laboratory isn’t much yet, I’ll admit. But this is not your destination. I’ve arranged for a transport to take you beyond the Divide where you’ll find…employment.”

The woman threw her legs over the table and clenched the edge. “I am a—”

Omega shook his head. “Not sure yet. To be honest, Father warned me about this. I have a tendency to rush in where fools fear to tread.” With a sigh, Omega took the woman’s hand and helped her off the table. “But don’t be afraid. You have the strength of twenty humans, the data banks of six species, and enough moral code to ensure your survival.”

“You will direct me?”

Omega shook his head, his gaze lowered. “No. That would ruin everything. If I’m to learn anything, you must discover yourself. But—” He looked up and grinned. “I’m working on another one like you, a male this time. He’s been a challenge, but he’ll come out all right in the end, I dare say.” Omega led the woman to a doorway, still clasping her hand. “Strange, I hate to let you go, though I know I must.”

The woman stopped on the threshold. “Who am I?”

Omega rubbed his brow. “You are what humans fear most. I was going to name you Justice but that rankled my sensibilities.” He led her across the threshold and down a long corridor. Other beings, Crestas, Ingots, and two Uanyi passed without comment. When they came upon a large tunnel, Omega led her to an open-sided vehicle and stood by as she perched on the edge of a seat. “It’s a short ride to the central station. Busy place, but I enjoy the bustle of activity.” Various beings entered the open vehicle. A Cresta lumbered over and gripped a central pole with his long tentacles while two, slim, Uanyis with their soft, rubbery exoskeletons slumped on a seat together, chatting in their own language.

The woman stared at her hands and then at the others. Omega watched her and sighed. When the vehicle stopped outside a docking bay, Omega nudged her forward. A huge window separated them from the stationary ships, docked for repairs or loading for their next foray into space. The woman stared at the masses of beings hustling all around her. “I see Ingots, Crestas, Uanyi, and Bhuacs—but none like me.”

“No, you are part android and part human. Humanity is not ready for you—yet. It’s your privilege to discover the larger universe before being introduced to your other half. I’ll be delighted to see what you make of yourself.” He pointed to the largest ship. “You will travel on that one, The Mercantile. A trader in need of protection has hired you.” Omega gripped her hand and gazed into her eyes. “There will be trouble ahead; war brews in the hearts of these beings. But I’m sure you will manage.” Omega peered deeper into Justine’s steady gaze. He smiled with a relieved chuckle. “Yes, you’ll do fine. There’s something ethereal about you.” Caressing her cheek, he mused. “Justine… Santana…holy justice. That’ll be your name. Whether you live up to it or not—will be up to you.”

A blaring noise swept across the loading dock. Omega took Justine’s hand and led her forward. “Time to meet your future.”

As Omega stood back, Justine ascended the boarding tube. She looked back once, clear-eyed and confident before she disappeared into the interior.

Omega waved. “I’ll be watching you.”