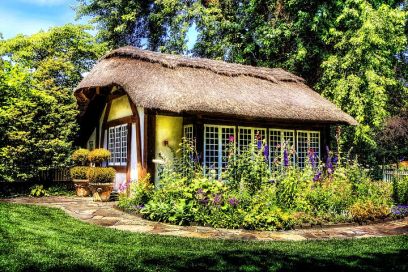 For a read-aloud of this story, check out https://anchor.fm/ann-frailey/episodes/Grace-Nelsons-Murder-esf84i

I’ve got blood on my hands, pure and simple, but I’m not sorry. Grace Nelson pushed her father’s wheelchair up a gentle incline toward a small, yellow house set aside on a winding, pave-stoned lane. It looks like a picture on an Oldearth vintage postcard. Grace sniffed. So Bhuaci. She squared her shoulders. By the Divide, I hate it here. So blinking perfect, I could smash it. Her eyes traveled over to a Bhuaci family strolling down the lane hand-in-hand. Or them.

“Grace? Why’d you stop? I’m hungry and it’s getting hot.” Old-man Nelson swiveled his head back as far as it would go.

Grace leaned in and shoved the chair up the last steps to the brown and white front door. “Just tired, Dad. Not as young as I once was, you know.”

The old man chuckled. “None of us are.”

Grace turned the chair sharply about, opened the door, and started back over the threshold.

Nelson pointed a shaky finger at a Bhuac male in a trim, green uniform, brown, military-style boots, and with a severe haircut strolling toward them. “What’s he want?”

“Lawman? That you?” Nelson’s wide grin accompanied his beckoning wave. “It’s been some time since you wandered down this way, Sir.”

Lawman offered a professional smile, but his gaze swept over Grace with anxious wrinkles around his eyes. He shook the old man’s hand. “It has.” He cleared his throat. “Sorry to hear about your wife. I was off-planet—”

Nelson waved the concern aside. “It’s better this way. She doesn’t have to slave away over a decrepit, old fool anymore.”

Grace’s impenetrable stare focused on the park across the road.

Lawman gestured weakly with a pained look in his eye. “With Grace here, you’ll always be well looked after.”

Nelson’s chuckle sounded like a cackle. “She’s wasting her life on me—but I can’t seem to get her to leave.” His grin widened as he stared Lawman in the eye. “So, what can we help you with? Or is this a social call?”

Lawman’s back straightened. “I just wanted to check in and see if I can be of service. You’re one of our first human settlers on Helm, and I’d hate—”

Nelson’s voice boomed. “Don’t be ridiculous! We’re not going anywhere; are we Grace? Quite happy here. Couldn’t stand Lux with that bright sun in my eyes every minute and all those high and mighties zipping about. Never knew when one might be in the room with you. Now, you Bhuacs may be shapeshifters, but at least you have respect for human sensibilities. You maintain your form, and nice forms they are too, quite pleasing—”

Grace’s stiff smile matched her stony gaze. “I’m happy wherever I’m needed.” She sucked in a deep breath. “And, at the moment, I am needed in the kitchen. It must be past noon.”

Lawman nodded. “Certainly. Don’t let me keep you. Good day.” He dropped a smile on Nelson and backed away.

Grace maneuvered the wheelchair over the threshold and started to close the door.

Suddenly, Lawman gripped the edge and leaned in, peering into Grace’s face. “Oh, and Grace, we know…about it.” He nodded decisively. “You mustn’t let it ever happen again.”

An icy gleam narrowed Grace’s eyes. “Don’t be ridiculous.” She swung her father’s chair around and let the heavy door fall shut. Her shoulders hunched up near her ears as she pushed the chair into a large, well-lit kitchen with a built-in oven next to a six-foot cabinet. She parked the wheelchair next to a cushioned recliner with a small table attached on one end.

Nelson swiveled his body from the wheelchair onto the recliner and plopped down with a long sigh. He snatched a datapad from the table and began to scroll through.

Grace pulled a container from a freezer unit, popped it into the wall-oven, and tapped a console. Efficiently, she laid the counter and her father’s table with bowls, utensils, and linen napkins. As she poured golden liquid into sparkling, crystal glasses, her father snorted. Her head snapped up.

Nelson’s eyes stayed glued to his datapad, but a smile played around his lips. “Silly fool. What’s he think he’s going do? Send me back to Lux? Imprison you?”

Grace froze. Her eyes rolled over to her father. “What are you talking about?”

Nelson slapped the datapad onto his lap with one eyebrow cocked. “Oh, please. You didn’t honestly think you could murder my wife without anyone noticing, did you?”

Grace reached out and leaned heavily on the counter, barely a breath escaping between her lips. “Oh, God.”

Nelson waived the sentiment away. “God had little to do with it, I’m sure. Besides, I’m not angry. Frankly, the old biddy was driving me mad. I’m sure that every Bhuac this side of the Divide felt sorry for me. You know, Lawman tried to talk me out of marrying Mara. Said she was unstable.” Nelson snorted. “Right about that! She may have looked like a nymph on steroids, but she acted like an Ingoti drug—”

Grace squared her shoulders and faced her father. “How long have you known?” Her blinking eyes searched the room as she wrung her hands together. “You don’t think Lawman will—”

Nelson’s eyes softened as he beckoned his daughter nearer. “Listen, it was my fault, really. I thought she’d liven up my final years. How was I to know she’d—”

Grace slapped the counter and swallowed, her gaze fixed on her father’s side table. “I poisoned her.”

“Aw, heck, she was poisoning me. Well, my sunset years, so to speak. Forget about it.” Nelson picked up his datapad and tapped it. “It won’t happen again. It’s not like you’re a serial killer or anything.” He grinned and darted a glance at his daughter before returning to his pad. “Then I’d have to poison you.”

Grace’s cooled gaze traveled from her father’s bowl to the cabinet and back to his bowl.

When Omega’s shadow appeared in Grace Nelson’s bedroom that night, she stifled a scream. Catching her breath, she gritted her teeth. “Lawman, is that you? Trying to scare me—”

Omega, dressed in a flowing, purple tunic with green leggings and orange slippers held up a long-fingered hand and huffed. “Hardly!” He circled the perimeter of the room. “I’ve been watching you, Grace Nelson, and I think you’re on the brink of great self-discovery.” He stroked his chin. “Or self-destruction.”

Grace took a step closer, her hands balled into fists. “Who the hell—?”

Omega flourished a graceful bow. “My name is Omega, last son of…oh, never mind. Listen, human, I’m trying to save your miserable life and offer you a chance. The Bhuaci are notoriously suspicious of strangers, and you certainly put their hackles up by killing one of their own, even though they admit—privately of course—that Mara’s moons weren’t in proper alignment—as they say.”

Grace sat on the edge of her bed and rubbed her temple. “I have no idea what you’re talking about.”

Omega flicked his index finger upwards and a small town appeared floating in mid-air. Humans bustled in and out of markets, and cars rolled down the dusty roads.

Grace stood up, fascinated, staring at the scene. “Is that a hologram—from somewhere?”

Omega pursed his lips. “That, my dear woman, is Mirage-Reborn—your new home.”

“Home? Don’t be stupid. Why would I go there? It looks primitive. There’s not even—”

Omega snapped his fingers and the town disappeared. “Because, Grace Nelson, if you don’t go there, you will be murdered here.”

Grace froze. “But my father….”

Omega laughed. “Don’t worry; we’ll bring him along. After all, he’s the reason you need to leave. Your mother didn’t die in her sleep like he says—she was very much awake—poor thing. Father like daughter, I always say.” Throwing his arm over her shoulder, he led her back to bed. “Get some sleep, Grace, and I’ll arrange everything in the morning.”

Grace stumbled onto her bed, pulled her covers close under her chin, closed her eyes, and wondered who she should trust—this stranger named Omega or the father she had never really known.

A. K. Frailey is the author of 15 books, a teacher for 35 years, and a homeschooling mother of 8.

Make the most of life’s journey.

For books by A. K. Frailey check out her Amazon Author Page