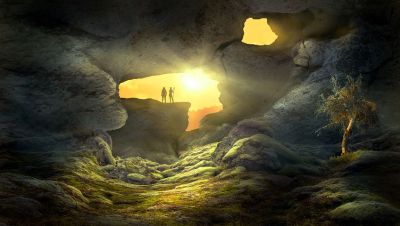 Teal led the young Luxonian, Sienna, to the far side of the lake and perched on the edge of a boulder.

A creak tripped over an embankment and illuminated a rainbow in a shower spray.

Enchanted, Teal turned from one glory to another and grinned. “So, you want to become a healer?”

Dressed in a rough brown tunic with a thin shawl thrown over her shoulders, Sienna navigated the swirling creek bed and perched on another rock, dipping her toes in the rushing water. “Yes.” Her arched brows bespoke a serious nature, while her soft tone beguiled unwary hearts. “Luxonians serve in many capacities—I’m drawn to the healing arts. My father and grandmother were healers in their own time.”

Slipping out of his sandals, Teal splashed in the water, his grin tightening as the cold rippled over his body. “Why Earth? These people have nothing like our physiology or skills. What do you hope to—?”

A falcon flew overhead and landed in a tree. It turned its head, peering at them through one piercing eye.

Sienna’s gaze swept the area. A lizard sat sunning itself on a rock a few feet away. Snatching the reptile by the tail, she flung it into the tall grass.

The hawk squawked and flapped its wings.

Glancing up, Sienna blushed. “Innocent creatures shouldn’t suffer just for being at the wrong place at the wrong time.”

A pigeon fluttered into the air. In an instant, the falcon soared in hot pursuit.

Teal winced as the falcon plucked its dinner from the sky. He glanced at Sienna.

Unperturbed, Sienna bent over and splashed water on her arms. “Though humans are not very advanced, they do have a keen eye for detail and an amazing depth of insight. In your reports, you mentioned purges, herb drinks, and poultices, which humans use to heal their sick and wounded.”

Teal nodded. “True. Both the Lake Clan and the Grassland Clan have healers.” He squinted. “I don’t know about the River Clan. Neb appears bent on hurting more than healing.”

“It’s in a war that the greatest cures are found—when they are most needed.”

With a nod, Sienna tiptoed to distant perch. “Yet you have set the Supreme Council on the brink of war with both the Cresta and the Ingoti.”

Jerking to his feet, Teal’s face flushed. “Why are you really here?”

Leaning back on a rock and lacing her fingers together, Sienna shook her head. “Isn’t it obvious? I want to learn. I’ve read every one of your reports. Fifth years are allowed access to planet documents—when it bears on our studies.”

Like the falcon, Teal turned his head and stared out of one bright eye. “And what—exactly—are you studying here? Certainly, Luxonians don’t need human poultices and herb drinks.”

Leaving the stream, Sienna wandered to the grassy bank and plucked a wildflower. She held it before her like a shield. “Some Luxonians look to a brighter, broader future, where we will interact with other beings more freely.”

Teal plodded out of the water, water dripping down his legs. He glanced at the perimeter. “There’s plenty of interaction between the Supreme Council and other—”

“That’s my point!” Sienna flung her flower to the ground. “The Supreme Council shrouds us in darkness. We know little beyond what we read in the guardian reports. They insist that they shield us from a hostile world—but do they?”

A murmur of voices rose in the distance. Teal sucked in a breath; alarm bells rang in his mind. “Neb’s closer than I thought. We need to move on.” He glanced around.

Scurrying across the distance, Sienna arrived at Teal’s side. “Would they hurt us?”

Peering into Sienna’s bright eyes, Teal scowled. “Neb would attempt to kill me—certainly. What he’d do with you—I don’t dare think about.”

“He’d remember you. You’d become the stuff of legends—and nightmares.” Taking her arm, he pointed to a high embankment. “We’ll hide over there. Lizard?”

“Not a good choice.”

Glancing to the sky, she pointed. “A falcon then.”

“Fine. Just remember, the Supreme Council does shield us from a hostile world, even when we’d rather they didn’t.”

“And the Cresta and Ingoti?”

The murmurs grow closer. Teal frowned, lifting his hand like a man taking an oath. “I’ll fight that war myself.”

Sienna gripped his arm. “And I’ll heal you—if need be.” She blinked away.

Teal stared—fascinated—and then blinked away just as Neb and his men pounded into view.