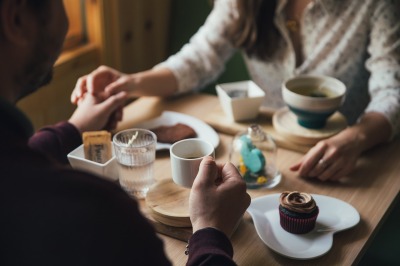 If Catherine had known what the day would bring, she would never have gotten out of bed.

“Well, that’s not entirely true,” she murmured as she flopped down on her bed that evening. The old-fashioned ceiling fan was covered in dust, and she wondered why she’d ever thought it was a creative choice. “Probably doesn’t even work. Like the freezer…the mixer…the stupid thingamajig on the dashboard.” She sighed, sat up, and rubbed her eyes. Lord have mercy; she was tired.

Boot steps clumped up onto the kitchen porch. One of her mongrel dogs started barking. Heaving herself free of the embrace of the bed, Catherine swore under her breath, her eyes darting to the purple sunset out the window. “Who on earth—?”

The dog she referred to as Sally, though she hated the name, upped her barking to frenzy mode. A shiver ran over Catherine’s arms as she hustled into the room. What if it was a crazy man? Or worse yet, someone selling something? Or—nightmare image—a religious cult member wanting to share the good news with her?

A man’s voice murmured in the darkness. Soothing words. He chuckled.

Alarmed, Catherine swung wide the kitchen screen door. Oh. Great. There lay Sally on her back, her legs splayed, with an idiotic grin on her face, getting a tummy rub from a total stranger.

Man’s best friend, maybe but certainly not mine. Catherine gritted her teeth and peered through the dim light to the stranger who had straightened up and stood to face her.

He was tall, his dark hair swept low over his brow, a little long, but not unkempt. He wore jeans and a black jacket over a rolled up long sleeved shirt exposing a serious tattoo, and his heavy boots had traces of mud on them. A working man.

Catherine frowned. He was bigger than her and perhaps two or three years older, but she didn’t feel threatened. Not exactly. She met his gaze.

“Sorry to bother you, but my car died at the end of your lane, and I’d like to call someone for help if you don’t mind.”

Suspicion flooded Catherine like a tsunami. “Why can’t you use your cell phone? Don’t tell me you don’t have one.”

He ran a hand along his jawline; a long red scratch marred a fading tan. “I tried, but either my cell’s out of juice, or there’s no reception around here.”

Catherine winced. She knew perfectly well that reception was spotty. She glanced at the mountainous clouds gathering overhead and made an impulsive gesture. “Well, alright. I still use a landline since my cell phone reception is as unreliable as a man on a first date—” Opps! I didn’t just say… She closed her eyes and stepped aside.

He swept past her and stopped in the middle of the room, looking around.

Catherine blinked and pointed to the far wall where an old-fashioned telephone, 1950’s style, sat ensconced in a wood frame.

He strode forward, picked up the phone awkwardly, and dialed a number.

Catherine lugged her school bag to the wooden kitchen table and dumped an array of papers, books, pencils, colored pens, and various school paraphernalia over the surface. She sighed and murmured, “It’ll take me all weekend…”

Throat clearing turned her around. She looked at the man in the bright glare of the kitchen. He was good looking. Not classically handsome but familiar somehow. His deep-set eyes looked weary, and something around the corners made her think he’d had troubles of his own. Good grief. He looked like a man who had known deep sadness.

This morning when she caught a junior high student cheating and brought the fact to the principal’s attention, she had been told she was too sensitive and needed to be more caring. Later, she discovered that the principal had a very friendly arrangement with the mother of said cheater. In the lounge, all the teachers had laughed when she protested the injustice of it all. Leanne even told her to “get a life and stop acting like a self-righteous old nun.”

Lightning flickered in the windows.

The man looked around at the country style kitchen that Catherine had labored so long to decorate. “Nice place.” He held out his hand. “My name is Clem. Sorry about intruding like this.” He flipped out his phone and grimaced. “Not a bar on here.”

“It’s the trees…and the fact that we’re in such a low spot…and out in the middle of nowhere.” Catherine wanted to slap herself. Shut up, you idiot!

My lord, how the smile changed his face.

“I’m out behind the McCarthy place. I just moved in…and no one mentioned that reception was so bad. I guess I should’ve done some research.”

A thundering crash of rain pelted the metal roof.

Glancing at the sprawled mess of spelling tests and math quizzes, Clem grinned. “I used to be a teaching assistant in Utah…corrected papers faster than a speeding bullet.”

Catherine snorted. “Anytime you feel a hankering to mark off atrociously misspelled words in red ink, you just let me know.”

Flashing lights vied with the pounding rain outside the doorframe.

Clem hustled forward. “It’s my friend, he lives next door. Only other person I really know around here. He’ll take me home.” He shuffled his feet. “If you don’t mind, I’ll come back in the morning and get the car.” He peered down at her as if asking permission…as if it were her lane.

Her throat, suddenly as dry as the Sahara, made her voice sound huskier than she ever intended. “That’s fine. It’s a dead end. No one goes down this way…except to check on the cows…in the pasture.” With a shake, she peered at him. “What were you doing…if you don’t mind my asking?”

He shrugged. “Just getting my bearings. I got work down at the power plant. As I was heading home, I realized that this lane is just behind my house. I had nothing better to do, so I thought I’d investigate. Didn’t expect my car to die.” He snorted. “Or my phone to quit…though…”

She didn’t need him to finish the thought. “Yeah. Me too. One of those days.” She met his gaze again. “Don’t worry about the car. It’ll be safe enough.” She stepped toward the flashing lights.

Clem followed and opened the screen door. He hesitated. “Thanks. I appreciate your trust. I was afraid you’d set your dogs on me.” He grinned as Sally whined and tried to smuggle her fat body between his legs.

Catherine rolled her eyes. “Lord save a woman from marauders with that specimen of canine protectiveness.”

Chuckling, Clem scratched Sally behind the ears. “I don’t know. I think she did all right. Glad she didn’t eat me.” He stepped out onto the porch, waved to the bright lights from the car parked in the driveway. He turned back to Catherine. “I’ll be back in the morning. Mind if I stop in and say hi? I’ll bring my red pen…”

Her heart jumped to her throat. Catherine swallowed. This does not happen in real life. Not to me. She sucked in a deep breath. “Sure. No, I mean, that’s fine. I have a pot of strong coffee about 7:30—sleep in on Saturdays…” She wanted to slap herself again.

“Great. See you then.” He stepped off the porch into the rain and disappeared into the waiting car. The bright lights swiveled as the car turned and drove away.

Catherine limped back to her room on shaky legs, her whole body radiating a heat she could hardly explain. She flipped the fan switch and plopped down on her bed. The blades turned smooth as silk and sent a delightful breeze over her skin. It suddenly struck her as enchanting. Even the dust looked rather quaint. “Well, what do you know? It works.”