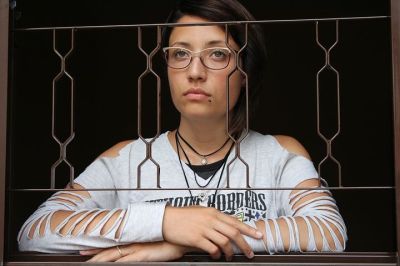 I knew Elaine all my life. Like the sister I never had. Yet I could not make it to her funeral. I couldn’t. Perhaps I simply wouldn’t. She had died long ago…

Growing up on the east side, we knew we had it made. Life was good. Part-time jobs were easy to come by, school was never a serious challenge, and there was always tennis, soccer, or long walks by the lake.

I first started to notice a change when we were playing a game of tennis. She was always competitive, but this time a missed shot didn’t just spark irritation, it sparked rage. A repair guy on the roof nearby chuckled when she threw her racket. He sounded like the voice of God coming from a blue sky, “Shouldn’t lose your temper like that, girl.” Elaine looked like she’d heard a ghost, and I pretended not to know what she was talking about when she asked if I heard the voice. I just laughed.

But she didn’t. She looked scared.

Throwing a racket was a little out of her normal emotional range, but fear, real fear took her to a new universe.

Before I knew what was happening she was off to France to study for a semester. No big deal. I had plenty of studying at home to do. College and work-study kept me out of trouble. Well, for the most part.

But when she came home…something had changed. Her confidence had been shaken. It reminded me of another trip she’d taken the year before on some island or another. She had tried to explain about the people, their lifestyles…how different everything was… But I couldn’t imagine. I didn’t want to. Sounded pagan and vaguely selfish. Not a world I wanted to explore.

By the time she entered graduate school, she seemed bent on exploring extremes. If someone was having a wild time, she wanted to in on it. No matter what that entailed. The wilder the better.

I plodded through my courses and kept an eye on her. But I could not follow where she was going.

One day we walked along the lakeshore, and she explained ever so seriously that she was seeking help for depression. I shook my head. She had not the slightest reason to be depressed. She had a good family, an excellent education, she had traveled far and wide, and she had a wonderful future…if only she would see it.

But she couldn’t see it. She couldn’t feel it. A friend of hers had committed suicide the month before and it weighed on her mind. She was afraid it would spread like cancer. She’d be next.

I told her to shut up and quit thinking like that.

Elaine pleaded with me, stomping along like a little girl. “I need help. I’m sick…on the inside. Medication might help.”

I remember feeling so old. Worldly wise in my vast years of watching family members destroy themselves with drug and alcohol cure-alls. I grabbed her arm and glared into her eyes. “Medication can’t help you. Tough this out. Once you’re on that stuff…you’ll never get off it.”

She pulled away, dragging her fingers through her short hair the way she always did. “You can’t understand. I’m mentally ill. I’m crazy.”

I laughed. “By the very fact that you know you’re crazy, means that you’re not really crazy. In pain. Yes. Upset. Of course. But you can work this out…give yourself time. Not drugs.”

I might as well have been talking to the trees.

Before I knew what was happening, she was on an anti-depressant regime that would have knocked a rhino off its feet. It seemed to work. She finished graduate school without major problems…except for that map-laminating incident.

Then she went to look for work and torpedoed nearly every offer she got.

I took a job in another city and shut my eyes to her issues, hoping they’d just go away. Hoping she’d grow strong again.

She called me one day from a state out west. She was visiting family and thought she had accidentally taken her medication twice…enough to kill her. I told her to go see a doctor. She hung up.

By the time she called again, I was married, had three kids, and she was engaged. We agreed to meet up in our old hometown first chance we got. When we did run into each other months later, she looked very much like the girl who threw her racket across the court. But she smiled when she hugged my kids.

Or so I thought.

The next call I got was from her brother. She had been killed crossing a street. She had stepped in front of a truck.

He wanted to know if I would fly out for the funeral. I was nursing my infant and it was the middle of winter…I had a lot of reasons not to go.

But I doubt I would’ve have gone even if her casket was next door and springtime flowers fluttered in the breeze.

Little by little Elaine had died. Not from childhood trauma, or teen rebellion, or even cultural clashes. Somewhere along the line her sanity, her identity, and her will to live a healthy life had eroded until there was only a thread left. And one day that thread snapped.

I may never know why.

A lot of years have passed…and I’ve never stopped praying for her. For the truth of it is, I now realize, she never really died.

Elaine will always live in spirit…and in me.

2 thoughts on “I May Never Know Why”