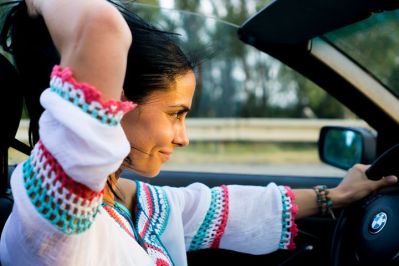 It was supposed to be a fairly simple day. Teach school. Take kids to piano lessons. Go shopping. Try to balance the bank account. Life in all its humdrum reality. Except it wasn’t. Practically never is in my world.

Last week I had similar plans on Tuesday, but instead, I got a call from daughter number one telling me that her car sat dead as a doornail in the university parking lot. After a great deal of running around, which by sheer chance included towing said dead car to a service station I knew and loved that happened to be closed, and therefore towing it to another service station, I managed to pick up my daughter after her late class at the university.

As we’re driving along a windy country road in the black of night with only a few iridescent eyes staring at us from the roadside (and one near collision with a bunny) I turn on a CD that my daughter had made for me. I was just about to skip a French song (I secretly didn’t like) when she informed that it was her favorite. Huh?

Soooo, I played the song, and as I drove around curves and ignored the roadside glares, she translated the words and explained the singer’s life history. Not only did I gain a new appreciation for French music, but I gained fresh insight into my daughter’s mind and soul. Well worth the price of a car battery and a tow.

Now this Tuesday, second daughter’s car battery lay down and died conveniently in my driveway. But since she had an exam and lab work, I offered her my car and before you could say, “Whoa there!” she also had my phone tucked in her purse. Yep, happy to oblige.

Well, I was…until I found myself circling our church building, trying to find a legal way into the House of God. Daughter number three had music lessons, and I wasn’t about to let her down. If only I had a cell phone to let the teacher know. But alas!

So I squared my shoulders and trooped to the legal office across the street and asked to borrow their phone for a quick call…or five as it turned out. They were amazingly gracious. As if phoneless, harassed mothers waked in every day begging telephone assistance.

It wasn’t until I climbed into bed that I realized that from one week to the next I had asked the assistance of at least half a dozen people, and every single one of them had responded with generosity and kindness. I had also learned the meaning of a French song, the sad life history of a singer, seen the inside of an office I had long wondered about and trusted that most likely everything would work out just fine. And it had.