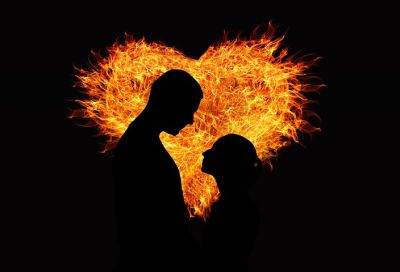 Teal peered into Sienna’s eyes as they lay on a grassy plain before a mighty cliff. A hot sun beat down on them from a clear sky. Propped on his arms and knees, he hovered over the length of her body.

A flash of fear rippled over Sienna’s face.

With a groan, Teal tipped his head back and plopped onto the grass beside her, sprawling out like a broken toy.

Teal rubbed his eyes. “You still don’t trust me.”

Yanking herself to her feet, Sienna brushed grass and dirt from her tan leggings. Her long-sleeved tunic rippled to the ground. “You don’t trust me—rather.”

Rolling to his side, Teal peered at her. “I’d like to. By all that is good and holy, I want to.” Rising, he slapped dry stems from his gray tunic.

Exhaling a long breath, Teal stepped closer and caressed her arms. He tilted his head to meet her downturned gaze. “I’ve never wanted a woman as much as I want you.”

Swallowing and batting back tears, Sienna shook her head. “I’ve never been this—”

Teal quirked a smile. “Vulnerable?” Impulsively, he pulled her into a tight embrace and tucked her head under his chin. “Me too.” He ran his fingers over her hair, across her shoulder, down her arm to her waist…and forced his trembling hand to stop. He lifted his eyes to the setting sun. “We’re in the midst of an interplanetary struggle. No one knows who to trust or what to believe.”

Sienna sniffed and pulled away. “You seem ready enough to trust that Crestonian and Ingot.”

“They’re Crestonians and Ingots. I know their true nature and their peoples’ hopes for this world.”

Snorting, Sienna turned her back on Teal. “Then you can’t trust them at all.”

With a chuckle, Teal glanced aside and froze.

A ragged figure, bent forward, scrabbled down a steep incline, grasping at rocks and tough weeds to keep from sliding.

Racing to his side, Sienna followed his gaze. She clutched his arm. “How’d he get here? It’s well beyond—”

Suppressing even the hint of panic, Teal swiveled around and surveyed the area. With a grunt, he grabbed Sienna’s hand and gestured with his chin. “Over there, under that rocky ledge.”

They scampered forward and hid in the deep shadows.

Ishtar scrambled to the bottom of the incline and turned aside. He padded on bleeding feet toward the desert.

Sienna frowned. “Where’s he going? There’s nothing on the other side but barren lands. He’ll die there.”

Teal stepped out from under the stony ledge and peered at the emaciated figure striding purposefully away. “He’s pursued.”

Sienna’s eyes widened as she glanced around. “By whom?” Snatching up a rock, she crouched for battle. “Can they see us?”

“No. And we can’t see them. But they are here nonetheless.”

With a snort, Sienna tossed the rock to the side. “You’re a regular Bhuaci with all your riddles.”

Teal watched Ishtar stumble. I should’ve seen this coming. A stabbing pain tore through his chest. “We need to return.” He glanced at the sky. “Officially, I shouldn’t even be here without Zuri and Ark. Luxonian Guardians should respect our own treaties.”

Sienna huffed and crossed her arms. “It was your idea. Don’t blame me if—”

Relenting, Sienna placed her hands on his chest and started rubbing in slow circles.

Teal peered down, clasped one of her hands, and examined it. “Never any jewelry. Why?”

With a teasing grin, Sienna slipped away. “I don’t need any. My mother taught me that a woman is enough in herself. My father agreed.” Her gaze softened. “He used to bring me autumn flowers. Said that beauty is fleeting.”

Teal glanced back to where Ishtar had rounded the rocky crevice, his voice dry and distant even to his own ears. “You believe that?”

“Of course. If something lasts—we don’t appreciate it.”

Teal locked his eyes with hers. “I disagree. Beauty is eternal. It’s our gaze that is fleeting.”

Ark sat on a log next to a rippling stream and slapped his fleshy, three-toed feet into the flowing water. He shivered in delight.

Zuri crouched on a boulder, his black bio-armor including headgear, bodysuit, and hard-toed boots, glinted in the bright sun. As he hunched over a handheld screen, his gaze scrolled over a data-stream.

Ark scratched his neck. “By all rights, we shouldn’t even be here without Teal. Cresta Accords are nothing to splash at, especially when they’re backed up by a Luxonian treaty and your Ingoti Magisterium’s seal of approval.”

With a grunt, Zuri scrunched his face and peered closer to the screen. “You gonna tell him?”

“Ahhh!” Ark swung his dripping toes from the water and dropped them on the end of the log, tipping backward precariously. Using two tentacles for support, he leaned further back and stretched out, pillowing his head on two other tentacles. “Perhaps I shall. I really feel I must. After all, he’s our friend. We don’t want to break trust with him.”

Zuri peered at Ark, grimacing. “Friend? What makes you think he’s our friend? He never believes anything we tell him. He always checks our data after the fact. And he reports every bloody word we say.”

“As do I. As do you.” Ark lifted his head and glanced at Zuri’s bent figure. “There’s more to friendship than trust, you know.”

The datapad slipped from Zuri’s grasp and dropped to the ground. “Blast!” He scowled at Ark. “You want to explain what your idea of friendship entails, exactly?”

“Endurance.” Ark groaned and rolled to a sitting position. “No Cresta worth his cranium capacity would ever bother with trust. We’re not like that.” He waved a tentacle in the dim light. “You’ve been reading too many memes on the Inter-Alien bulletin board.”

“Don’t be ridiculous. I’m suspicious of everyone.”

Zuri smirked. “I just told Teal where we are.” He strode to Ark and stared down at his limp figure. “I contacted him as soon as we arrived and told him that you wanted to follow up on Ishtar.” His eyebrows rose. “How do you like that—friend?”

Ark shifted aside, pulled one of his boots forward, and wagged it at Zuri. “Fine with me.” He grinned, quite pleased with himself. “I told him where we were going even before we left Crestar.” He wagged the boot again. “You know how these things pinch. Do be careful this time.”

A new chapter of OldEarth Ishtar Encounter coming every Tuesday and Thursday.

Have a blessed day,