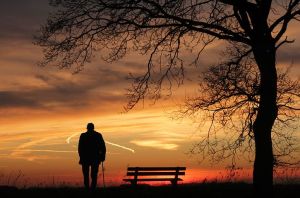 “Ya know…you’ll never live to see the nuts ripen from that tree. Much less eat them.”

George grunted as he pressed the shovel deeper into the sod. He didn’t look up, but his grunt served a duel purpose. At eighty-three, it took every ounce of his strength to dig even a moderately deep hole. This one had to be large enough to bed a well-rooted sapling. The woody mate stood proudly to the side, evidence that George’s tenacity hadn’t dwindled with the years. He glanced aside. Had his guttural response made his point quite clear?

Randy sucked a hard candy and nodded. “You know what I mean, though.”

Stabbing the earth to create a soft landing, George turned the shovel every direction he could and broke up the larger clumps. Satisfied he motioned to the arboreal infant.

Obliging, Randy placed the root ball in the center of the hole. Together the two men shoved loose earth around the exposed plant. Randy lugged a twenty-pound bag of luxurious soil to the edge and using both hands, poured the rich blackness around the trunk, creating an even mound.

“That’ll do.” George sloshed a five-gallon bucket of water to the edge and tipped it near the base. The mound melted like sugar in tea.

Randy poured more dirt and sucked the last of his candy bits from his teeth. “You’re doing this for grandkids, then?”

A woman’s voice called from the doorway. “Dinner’s ready. You boys better hurry up or it’ll get cold. Janie’s going to stop by on her way to the bank and pick up that piece you want repaired. Better be washed up.”

Randy shook his head as he tossed the nearly empty dirt sack over his shoulder. “What’s the bank got to do with a well pump, I want to know. That woman just likes to run around town. All day and every day.”

The empty bucket banged against George’s knee as he walked. “The grass is always greener…”

As they entered the kitchen door, the smell of fried chicken, baked potatoes, boiled asparagus, and brownies smacked into them like the first day of summer vacation. Olfactory nerves did a happy dance.

Selma looked Randy up and down, apparently considering whether to send him back out the door or let him stay. “You get that last quarter done?”

Selma patted the tall man’s arm. “Well, you can eat and then help Janie put that pump part in her car.” She glanced at the laden table, ticking items off her fingers. “Oh, shoot, the butter!” She twirled and shot off, a heat-seeking missile after a new target.

Randy slipped into the nearest chair silent as a mouse sniffing the cat’s dinner dish.

A woman wearing a composition of pink jeans, a sky blue blouse with matching sandals, and jingling earrings, bounded into the room, pulled up short, and pressed her hand against her chest. “Thank God! I was afraid I’d find you all laid out on the floor.”

Sliding the butter dish beside a tall stack of bread, Selma eyed her cosmopolitan daughter. “We don’t usually eat on the floor, darling. Why’d we start now?”

George came in drying his hands on a towel. He worked his way around his DNA replica and dropped the towel in Randy’s lap.

Randy took the hint, slid out of the chair, and headed for the tiny washroom off the kitchen door.

George plunked down at the head of the table and answered his wife’s question. “She heard that the economy is collapsing, our leaders are fools, there are twenty-three new ways to die, and—rumor has it—a comet is heading directly for earth.”

Randy poked his head out the washroom doorway, a confused frown running riot over his forehead. “Does that mean that the sky is falling—literally?”

With admonishing fingers, Selma waved the obscene consideration into oblivion. “This fried chicken won’t get any tastier just sitting here.”

“But, mom!” Janie’s hoops danced. “We have some really big problems to discuss—”

George clasped his hands and bowed his head. “They’ll wait till after dinner.”

The dinner could not have been tastier.

As he scooted his chair back, George peered from his wife to his daughter and finally landed on his nephew. “You asked if the nut trees are for the grandkids.” His gaze bounced off his daughter. “If we ever have any.”

Randy wiped his mouth, his eyes rolling upward, a clear attempt to retrieve his languid thoughts from the morning. “Yeah. Well…it’ll take a long time for those trees to mature, you know.”

Selma stopped; plates piled high on her left arm, her right swinging a dishcloth. “You planted them!” Her gaze softened, and she scurried to the window. Craning her neck, she smiled, unloaded the dishes, returned to her husband, and threw her arms around his neck. “You are the dearest man alive!”

Janie shook her head. “Like nut trees are going to any good. We’ll be lucky to see next Christmas the way things are going!”

In an act of open defiance, Randy tipped back his chair—normally a no-no. “To be honest…I don’t see the point either. Janie’s divorced and neither of us has kids…so who—”

“I don’t have to see Christmas to believe that someday, someone will enjoy those pecans.”

Selma wiped her sentimental, tear-filled eyes. “I told George I wanted him to show me that he loves me—in a new way.”

George chuckled. “She always loved those nuts. So when I proposed, I put a ring on the top of a pecan pie and gave it to her.”

Randy’s chair legs hit the ground, his eyes wide, taking in unrealized vistas of reality. “I never knew you had it in you—”

Janie straightened her shoulders and shot to her feet. “We’re just wasting time. I’d better get that pump part. At least I can do something useful.”

Randy took his cue, stood and bowed his gratitude to Selma. He pressed George’s shoulder as he followed his cousin out the door. “Never would’ve guessed.”

Selma sighed, reaching for her husband’s hand, her wedding ring glinting in the noonday sun as it poured through the kitchen window. “She doesn’t understand, does she?”

George stood and wrapped his arms around his wife. “Few do.”

A. K. Frailey is the author of 15 books, a teacher for 35 years, and a homeschooling mother of 8.

Make the most of life’s journey.

For books by A. K. Frailey check out her Amazon Author Page 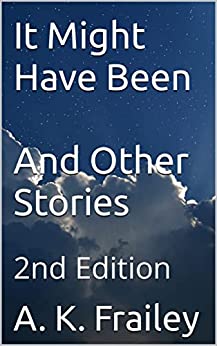 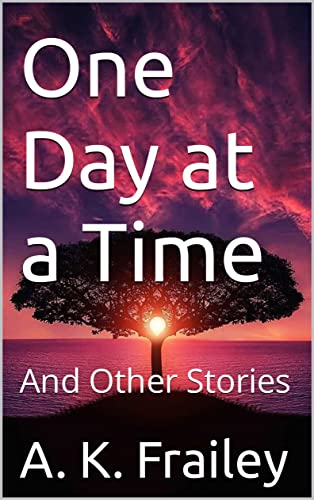