Part murder mystery, part family drama, part science fiction epic, OLDEARTH MELCHIOR ENCOUNTER addresses themes of the line between good and evil and what makes a family…the overarching plot with the aliens ties everything together to make a cohesive, epic novel…The dialogue performs at its best when it is punchy and expressive, such as when Melchior faces his son Wilfred…”

A published author of 15 books. The majority are historical sci-fi where people of ancient times struggle to find meaning in a world dominated by evil choices. While managing their own conflicts, aliens fight for their place in human events. Movie director and producer Cary Solomon endorsed me with the summary, “Ann’s work ranks among the best.” I’ve been writing for over a decade and host podcasts of my short stories and life reflections. Since I was widowed 8 years ago, I have raised my 8 kids and discovered that epic trials forge epic heroes.

Find my work on my Amazon Author Page https://www.amazon.com/A.-K.-Frailey/e/B006WQTQCE

Read More About Me One extended family traverses the course of history through Aram, Ishtar, and Neb in a world of wild beasts, craven spirits, and noble souls. Generations later, in the first century AD, Aram’s descendant, Georgios battles a world of dark secrets, deceptive promises, and hope renewed. Four hundred years later, Georgios’ descendant, Melchior, discovers that his vengeance is not as powerful as God’s plans. Forced to leave his clan and his children behind, Ishtar staggers into a vast wilderness and encounters a desert nomad who loves him as a son. When foreign raiders approach, Ishtar must discover if he can move beyond madness, protect his people, and reclaim his family. Eager to know the source of Ishtar’s strength, a watching universe must learn if humanity can save them from a spreading darkness.

Check out all of my Historical Sci-Fi Books As a prelude to the Newearth series, Last of Her Kind sets the stage for an inter-alien alliance. Cerulean’s admiration for Anne evolves into an extraterrestrial high road—offering the universe true humanity. Found guilty of war crimes, Justine Santana, a Human-Android hybrid is shut down. Taug, an alien from Crestar, must eliminate his father’s mistake—a Human-Cresta crossbreed named Derik. When Taug awakens Justine and charges her with the assignment to kill Derik, he never suspects that she might discover the meaning of love and her intrinsic humanity. Her freedom hangs in the balance. Is she a woman—or a weapon? The world ended on a Thursday.
Technology crashed, an alien race invaded, and my husband and children were in different locations. To survive, my heart dug deep into the homestead. Hardship tested my ingenuity while loss challenged everything I believed in, but despite every kind of sin and suffering, my homestead remained true. There's no place I'd rather be.

"Spring and summer dazzle us with sunny days, warm breezes, blossoms, and birdsong. It's time to grow the garden, protect the chicks from marauding raccoons, and romp in the fields with rambunctious puppies. Soak up the sun and have fun while we may"
A.K. Frailey 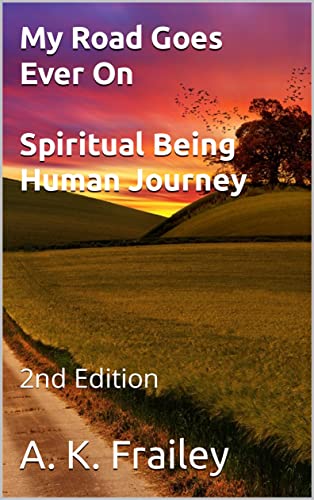 A series of inspirational reflections that continue my journey as a widow raising a large family in a turbulent world. As a sci-fi writer, I see extraordinary possibilities embedded in the fabric of the human race. We have been placed here on Earth for a reason. When I am uncertain or afraid, I learn what real courage looks like. When death strikes, I must choose—the hope of mysterious faith or the barren desert of disbelief. My careful or careless life says everything about who I am and what my time on this earth means—yesterday, today, and into tomorrow’s forever. A collection of contemporary short stories involving families, friends, and distant relations. It is the hazards of daily life that test the soul. Nobility, bravery, decency, kindness, and mercy are the shafts of light that pierce the darkness of the human experience. Keep your eyes open and your heart aware—you might just recognize a familiar friend. Spiritually uplifting poems, reflecting life’s trials and tribulations in nature and in our shared human experience. Grace shines the light of hope in the details of our lives, helping us take the next journey-step. Keep going. Hope’s embrace awaits.

Author A.K. Frailey’s first installment of the OldEarth series, Aram Encounter, drops readers into a prehistoric time where clans of early hunter-gatherers, farmers, herders, and others clash and collaborate while being observed, unknowingly, by more technologically advanced galactic neighbors.

Tense encounters, crisp action, failures of leadership, and dramatic surprises power the story’s main thrust, which concerns the relationships between the ancient humans, both at the tribal and personal level. Frailey creates compelling characters in each of the human factions, especially Aram, who is haunted by loss, and bold Pele of the river clan. The stakes of their conflict are urgent, as the fate of human development hinges on them.”

Enter your email address to follow my blog and receive notifications of new posts by email for free stories, poems, and life reflections