Once again, I have learned that being kind to others, offering my time and attention, opens doors and windows I would never have thought possible. Living in a small town, I don’t have the reach of writers who live in a metropolis. Though I also know, after growing up and working in big cities, that the illusion of being “connected” can be very discombobulating. Being alone in a crowd sort of reality.

So, when I do connect with someone, I make an effort to mean my words and not simply use others for my own ends. I wouldn’t want someone to do that to me…

I connected with a Catholic writer, model, and actress on LinkedIn, Anne DeSantis, and we ended up chatting on the phone, discovering in the process that we had a lot in common. We are both about the same age, homeschooled our kids, and have similar life visions. Her schedule is busy. My life is full. It was hard to connect except here and there. But we both made the effort, though sometimes that meant we had to reschedule our chats three or four times.

We understood our limitations and just kept trying. I’ve introduced her to friends of mine online. She has introduced me to friends of hers. Sometimes the connections work out. Sometimes things fizzle out. But that’s part of the process. Being open to what might happen. To the good that is possible.

She recently connected me to a journalist for The Hollywood Times. That led to an interview. Me? And The Hollywood Times? A very unlikely combination, indeed. But I have learned to deeply appreciate my writer-friend Anne, and our journalist friend Jules, and their heartfelt, enthusiastic love for great stories.

Life is an unfolding mystery that encourages beauty and goodness. I’ll never know what is around the bend or over the next rise. But open doors and windows call. Beckoning me forward. 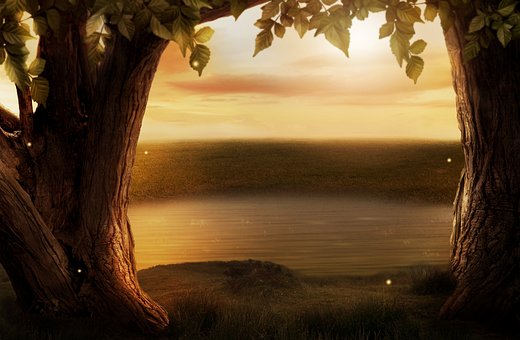 When I read a good book, I feel like I get the value, meaning, purpose, and passion of life’s struggle better than when I am just doing the ordinary duties of the day. The kids and I are currently reading Anne Of Green Gables, a story where the author draws out the fantastic elements of the ordinary. Her descriptions of a sunrise and sunset allow you to see the grandeur of the moment. I see through her eyes more powerfully than my own.  When reading a What if… story like Flowers for Algernon, I understand the value of a human soul a little better. Strange?

Perhaps it is because writers try to see what is lost in the glare of “ordinary.”  They try to recover what we forget to notice. We all have the potential of a good writer, if not to put things down on paper, at least to look again and see what is before us with new and vivid appreciation.

Well trained actors do much the same.  They take real life, act it out, play it up, and help us to see what is right in front of us. Authentic writers and actors can help the blind see and the deaf hear.  Life is meant to be lived passionately, but it takes skill and determination to do that. Occasionally, we can be pulled from the ordinary into the extraordinary and reminded that there is more to us than we see with our mortal eyes.

In my mind, J. R. R. Tolkien is a heroic figure. He understood that the greatness of humanity lies within each of us through our faithfulness to our daily mission. He was a Catholic, the son of a Catholic convert, and an ardent believer in God. It was under his influence that C.S. Lewis embraced the reality of Christianity.  While a young man, he formed a club with some close friends, and despite the small size of the group, they had some very big aspirations.  They believed that they had a mission to change the world, to make it a better place.  As for many people during World War I, (and later World War II) this vision was put to test when several of Tolkien’s friends died. They were not able to live out their noble aspirations. But in a letter, Tolkien was reminded of their ardent dreams, and he was encouraged to go forward—to fulfill his own potential. He did. An ordinary man in so many ways, yet his faithfulness to his family, to his wife and children, his students, his friends, and his stories reach us today.

After I had read most of his major works and become astonished at his incredible insight and clarity, I decided to read more about him so I could better understand his background and his mindset. In one book (J.R.R. Tolkien: A Biography by Humphrey Carpenter), I read about one of his typical days where his bicycle broke down and he was late for dinner while a stack of papers waited at home to be corrected. I was nearly pulling my hair out thinking about the fact that he could have been home writing great literature.  But then, (after I became more reasonable), I realized it was because he knew how to fix a bicycle, cared about being home for dinner, made it to meetings, and corrected innumerable papers that he was the kind of man who could write so faithfully about the human heart and the reality of suffering as well as the idiosyncratic silliness of common human interactions.

Tolkien, like many of his characters, could not predict the future, but he was engaged in humanity’s struggle to overcome evil, nevertheless.  May I today aspire to the same noble faithfulness of a simple Hobbit—and an honest writer.

Last of Her Kind http://amzn.to/2y1HJvg